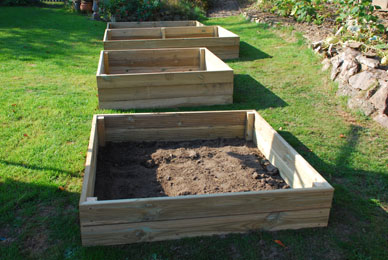 Mark measured the beds. They equal 80 cubit feet… whatever that means in metric I can hear someone asking me when I phone the soil company. I just thanked Mark and decided to not look daft by asking what that was in English.

What a hard decision choosing soil is! I took the advice of a professional gardener I have met who recommended a local supplier.

He came and looked at the raised beds and announced ‘you’ll need 4 tons.’

When chatting to friends, all of a sudden four tons sounded way over the top. All of their eye brows went up when I said how much I’d ordered. But too late now it’s coming tomorrow!