Home / News / Was this ladylike?

I have been listening to Chris Evans on Radio 2 in the morning.  He is so happy and positive – it’s been great to hear him.

He gave two of his team eggs from his own chickens, but then said that they had stopped laying at the moment.  Within minutes a lady had emailed in to say she gives her chickens warm porridge with dried fruit. 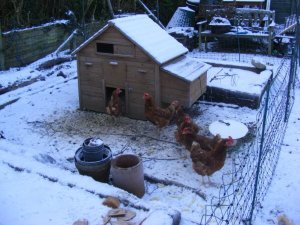 My chickens don’t get that, but it was a good idea.  So I made them some.  Have I told you before that they are disrespectful creatures?  They ate the first batch with gusto so I thought I would make them some more.

My friend Sue had come to see me and watched them tucking into the porridge saying aren’t they lovely, until one of these creatures decided it was better to stand in the porridge to eat it!

‘I told you they were disrespectful’ I said!

Anyway egg production has increased! I like them now 🙂  Well, Mark came in laughing yesterday.  He had gone to see them and whilst giving them some fresh water heard a ‘thud’.  One of them had laid an egg whilst standing there waiting for her porridge! Laugh, I wondered if she was embarrassed or whether the others were disgusted and told her to go to the ladies room to do that sort of thing!

But more porridge will be served tomorrow.

I am getting my potatoes this week, putting them in egg boxes on a sunny window sill and will see what happens next.  If you want to do the same, we can grow them together.

Let me know which ones you get and I’ll report back too.  The weather looks to improve here by Friday – might even feel like spring,